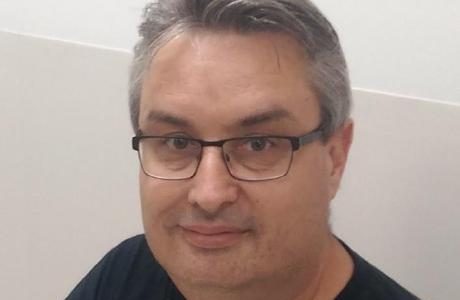 It is with much sadness we share that our great friend and colleague, Simon Gladman, has died suddenly. Simon has been a community leader for many years and his passing will leave a huge gap in so many ways. Simon was a role model, a generous supporter and a trusted advisor to his Melbourne Bioinformatics and Galaxy Australia team members. His many friends and admirers will ensure that his impressive legacy will live on.

It is my privilege to have known Simon for more than a decade. I would normally say that over that time we became close friends, but actually that happened in a matter of days, as it did for pretty much everyone Simon met. Simon was a people person first and foremost and made friends not just easily, but by default – if he met you, he liked you and you liked him back – that’s just the way it was.

I was lucky enough to work with Simon for the whole time I knew him. It’s not often someone is both a highly admired workmate and a very close friend, but Simon was to me. It gladdens me to say that Simon loved what he did, and was very very good at it. As a people person, Simon loved building things and seeing them used by lots of people for public good, and that’s exactly what he did – to an extent not many others could match. He was a global leader and a bedrock of the Galaxy community, and he will leave a devastatingly large hole professionally, socially and emotionally in so many people’s lives around the world.

It’s hard to find a chink in Simon’s armour. He was a leader if something needed leading, he was a powerhouse if something needed doing, he was a joke teller if you needed a laugh, he was a counsellor if you were upset, he was a mentor, he was a supporter, he was an extraordinary father and partner. Simon was the one who came to the pub if you needed a drink, who came to your house if you needed a hand, first to volunteer to help and last to leave. Amongst all that, Simon somehow found time for volunteer firefighting in his beloved west Melbourne and it won’t surprise anyone to know that in this very demanding job, when tragedy of all types struck his community, Simon was first on hand to pick up the pieces. He wanted nothing in return.

I don’t think I saw him in anything but a good mood for the entire time I knew him and it always cheered me up seeing him. He had the gift of infecting you with his optimism and motivation just by being there – whatever the challenge was, there was an upside that Simon would find and then bring everyone along.

‘Blessed are the cheesemakers’ – Simon would have laughed at that. To me he was a friend first and always. I will miss him enormously.

We know this loss will touch so many people. Our deepest condolences to Simon’s family and all of the communities he was involved in that are now in mourning. We take some comfort in knowing that his suspected heart attack happened while he was characteristically at the centre of fun with his family.

We invite you to remember some of the good times you shared with Simon. We are collecting the thoughts, reminiscences, acknowledgements, photos and praise from the many grateful people that knew Simon. We will collate these for a memorial webpage to help us pay tribute to Simon and his valuable contributions.

Keep an eye out for further reflections as everyone comes together to remember Simon.

Please send your musings about Simon to christina@nullbiocommons.org.au.